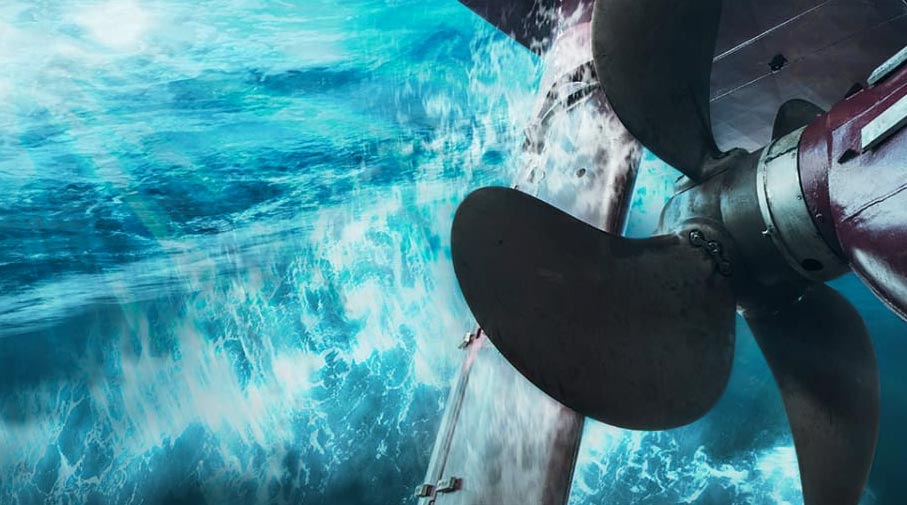 Propellers that are used in yachts can be of different types, but their function remains the same. The water flows through the propeller the same way as the air flows through a fan. A propeller draws in water from its front end, which is the end facing the yacht. The spinning propeller causes water to accelerate through it, which creates a high-velocity jet stream.

This stream of water exits the propeller through its rear end with great force. The high-speed acceleration of water ultimately moves the yacht in the forward direction. Propellers can have three to five blades. More number of blades would mean greater propulsion. Each of the blades in a propeller is designed with a slight curve and has a particular shape. This helps in moving the water through it.

The part that hits the water first is the leading edge. The trailing edge is the part through which water leaves the blade. Starting from the trailing edge, the curve of the blade extends to the hub. Also known as the cup, the curve is what provides the propeller blade with a pitch or angle. Before choosing a propeller for a yacht, it is essential to first determine the sailing vessel’s purpose.

Propellers are made using aluminium, steel, or brass. The least expensive among them is the one made from aluminium. Such propellers are useful for yachts that don’t need to focus on speed. A propeller made from stainless steel can withstand the hitting of sand, debris, and rocks. The heavy-duty brass propellers are used for heavier yachts.

Here are the propellers used in different types of yachts:

The general propellers are used in yachts hired or purchased for pleasure cruising. They can be classified into six different types. They are basic stainless steel, basic aluminium, cleaver-style, high-reverse thrust, chopper-style, and high-performance stainless steel. Owing to the shape of their blades, the propellers vary in appearance.

A propeller that uses round-eared blades is classified as the conventional type. The blades in these types of propellers have a rounded contour. Such blades also have skewed and come in various shapes based on the application of the propellers. Conventional propellers are designed to run fully submerged but can run surfaced in certain cases with lighter loads.

Cleaver is a type of propeller that has blades with their trailing edge cut on a straight line. These blades are often accompanied by a cross-section that appears like a wedge. The trailing edge is the point that is the thickest on a pitch line. The leading edge is thin and sharp. Such propellers are suitable for elevated engine installations. They allow the blades in such types of propellers to break the water surface.

Weedless propellers have a rounded blade with a high-degree skew. A weedless propeller is used in yachts that move through vegetation that mostly comprise weeds. The propeller of yachts moving through such areas can jam up with weeds.

They may even stop working as a result. With the use of weedless propellers, such situations can be prevented. The blades of these propellers are designed to thrust the weeds away and conserve battery power in this process.

6 Fabulous Luxuries Found in the Most Expensive Yachts