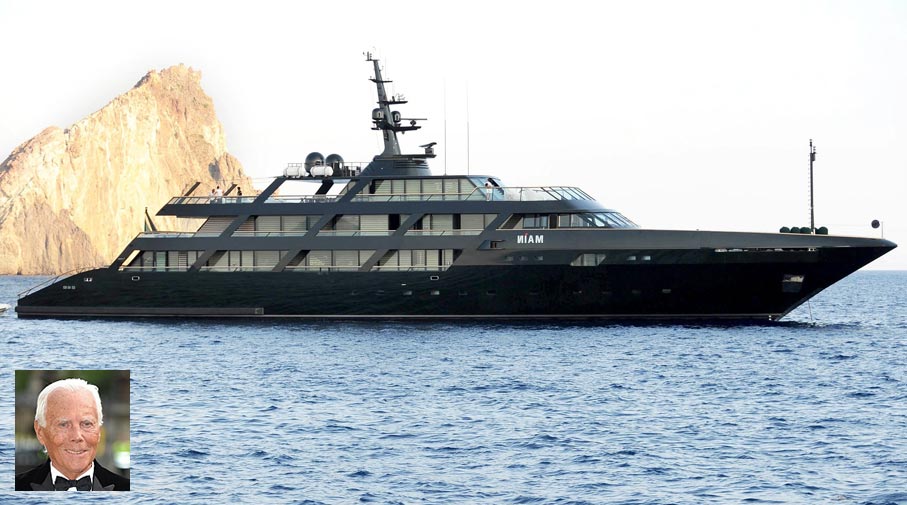 Being rich and famous certainly has a lot of benefits. Almost all the famous people in this world enjoy certain luxuries that many others can only dream of. The vacations that they take are no ordinary ones. Their vacations are luxurious and many of them even have the privilege of owning elegant private yachts.

Such mega-vessels are equipped with swimming pools, gyms, movie theatres and several other amenities. After all, they need some pampering once in a while to escape their highly stressful lives. Here are some of the famous personalities in the world who own luxury yachts:

Who doesn’t know this world-famous Italian fashion designer? By the end of the 20th century, Giorgio Armani became the most successful designer of Italian origin. He is also recognized worldwide for pioneering red-carpet fashion.

In 2010, he opened the Armani Hotel in Burj Khalifa, the tallest building in the world. Not many people know that he spent over $60 million for building ‘Main’, which is a 213-foot yacht. It took 30 months to build this yacht at Codecasa Shipyards located in Italy.

Rafael Nadal needs no introduction. This Spanish professional tennis player has been ranked No.1 for 209 weeks in the ATP rankings. At age 19, he was among the most successful teenagers in the history of the ATP tour. In 2016, he bought the model MCY 76 of Monte Carlo Yachts and gave it the name ‘Beethoven’.

The interior and exterior of this yacht were designed by an Italian design team called Nuvolari Lenard. According to Nadal, staying on his yacht has been quite beneficial for him. He has spoken about how it helped him get rid of the stress arising out of his high-profile career.

An American professional golfer, Tiger Woods became a professional in the sport at the age of 20. He had won the 1997 Masters with a record-breaking 12 strokes. Additionally, he had also won three PGA Tour events in the same year. With these wins, he moved to number one in the world rankings. All of this happened within a year of him becoming a professional.

He owns a luxury yacht named Privacy, which is 155 feet in length and was bought for $20 million. This globally renowned golfer also spent his wedding night with his ex-wife on this yacht. The vessel is big enough to sleep more than 12 people. It also has a gym, cinema, and Jacuzzi.

Larry Ellison is Oracle Corporation’s co-founder, executive chairman, and chief technology officer. He was listed as the 9th wealthiest person in the United States in 2021 by Bloomberg Billionaires Index. Ellison is also the owner of Lanai, the 41st largest island in the country. He previously owned a yacht called Rising Sun. However, he sold the huge yacht to David Geffen in 2010, as he felt it was too big.

He now owns the relatively smaller and luxurious yacht called Musashi. It is 288 feet long and was built in 2011. Ellison named this boat after one of the revered warriors of Japan known as Miyamoto Musashi. This yacht has a basketball court and two master suites.

5 Most Expensive Yachts in the World

Types of Propellers Used in Yachts